Home > About > History of ABAA 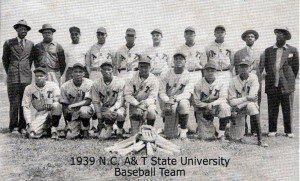 The Lima’s have truly been Aggie born and Aggie bred. Cory Lima grew up listening to the Aggie tall tales of his forefathers and wanted to be a part of the legacy. Cory entered A&T in the Fall of 1993 and began his four-year stint as an Aggie baseball player. Although the Aggie Baseball team didn’t win any championships during that time, Cory befriended lifelong teammates and played one year under current Aggie Baseball Head Coach, Keith Shumate. After graduation, Cory and fellow pitcher, Ezra Cowan, always talked about putting something together, so that their teammates could come together during homecoming. Cory stated that if something was formed that they should include the entire Aggie baseball family, including his father’s teammates and all living former Aggie baseball players. It was a great idea, but nothing came of it until the 2006 Aggie baseball team came to Birmingham, AL. Cory Lima was living in Birmingham and went to see the Aggies take on the University of Alabama at Birmingham, a member of Conference USA. The Aggies easily defeated the Blazers, 2 out of the 3 contests. Lima was inspired and discussed the need for an alumni organization with Shumate after the game. Shumate endorsed the idea and Lima began assembling his teammates, including his father, to form an official alumni association, not only to gather around homecoming, but to assist the Aggie baseball program in all of its endeavors.

On October 20, 2006 the former Aggie Baseball players that responded to Lima’s call became the founding members of the Aggie Baseball Alumni Association. The group met at Pleasant Ridge Golf Course and founding members of the organization were, Cory Lima (93-97), Crawford Moser (91-95), Ezra Cowan (92-96), Jason Moore (96-98), George Lima (68-71), Austin Love (99-04), Donyell Bryant (92-94), Steve Halyard (93-94), Tim Wilson (97-99), Larry Goldston (96-97), Chris Leonard (90-94). This small faction of men met to discuss the mission and purpose of the association. The ABAA Constitution and Bylaws were written and the association began its journey. The first year, members focused on building the infrastructure of the organization and acquiring new members. Due to the fact that members are spread out all over the country, it was decided to conduct only two major fundraising events a year.

A spring event was created, that would serve as a baseball homecoming. The association named the baseball homecoming weekend, the Groomes Spring Classic (GSC) in honor of legendary A&T baseball coach, Mel, “Big 10”, Groomes. The weekend is centered around a home conference series during the Aggie baseball season, and consists of the fundraising golf tournament named the GSC Golf Invitational, the presentation of the ABAA Achivement Award, and the GSC Tailgate Party. The other event is an annual Fall fundraiser, the Aggies vs. Alum Bums Alumni baseball game. This annual fundraiser is the centerpiece of the ABAA Fall Business Conference during Aggie football homecoming weekend. The ABAA is entering its fourth year of existence and continues to grow.